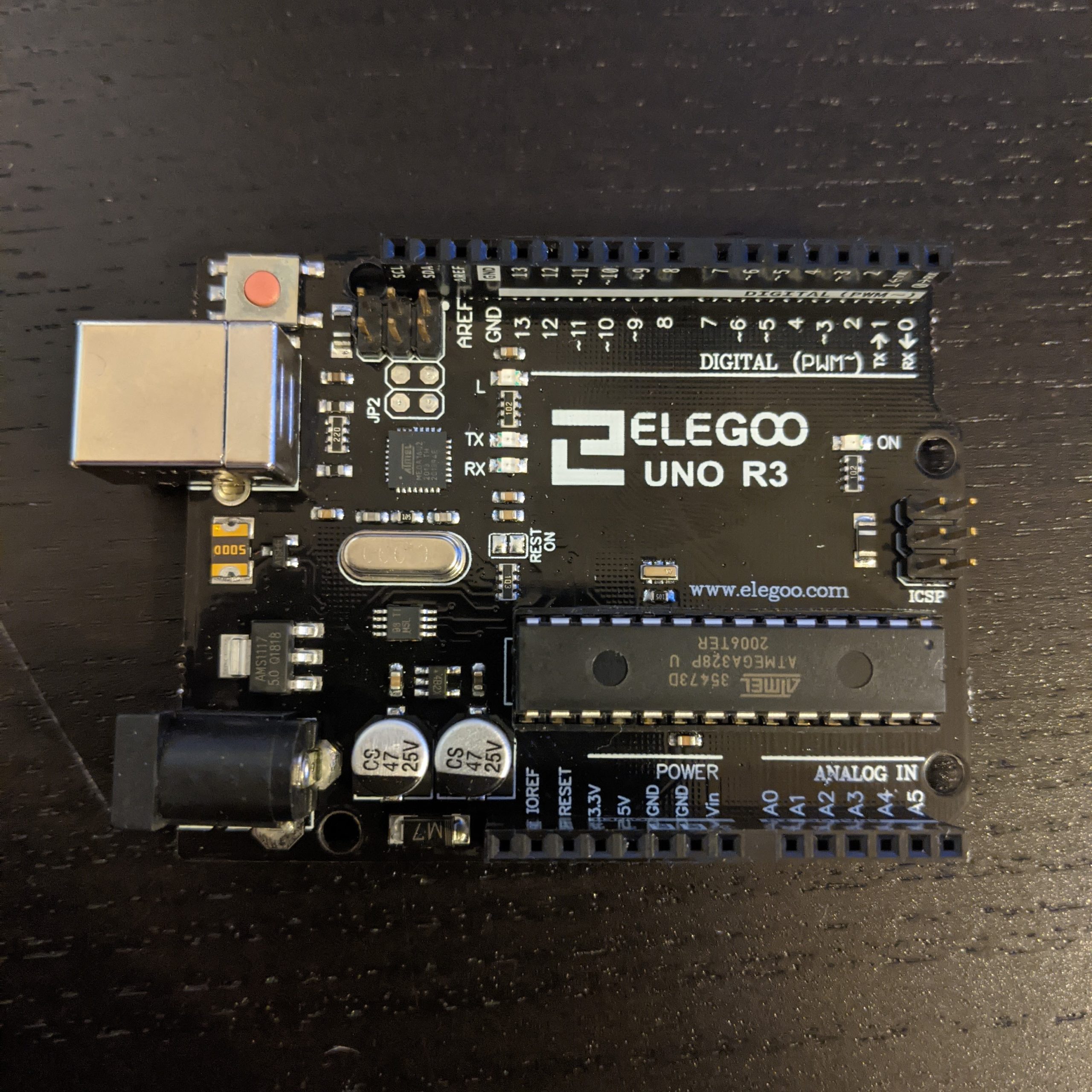 by Riley O'Brien
in All About Arduino, Electronics
Comments

Hi Makers! This week, we’re getting started on a new series. Interested in electronics, or just want to pick up a new hobby? This series, All About Arduino, will help you out: we’ll be going step-by-step and make a variety of basic machines using the Elegoo UNO Project Super Starter Kit, which gives you everything you need to explore everything an Arduino can do!

First, in this blog post, I’m going to go over what an Arduino is, and some of the basics of using electronics. If you know absolutely nothing about electronics or programming, this the place to start! I’ll be documenting everything that I learn as I experiment and create with these components. Hopefully, I’ll make some cool things in the process, and get neat little electronics in addition to new skills! Alright, now with all that said, let’s get into it!

I. What’s an Arduino?

In short, an Arduino is a machine that lets you take inputs and turn them into outputs. You can plug in a light sensor as an input and a speaker as an output, and have it translate light levels into sound waves; or your input could be a button, and your output the light from an LED!

Arduino itself is a company that makes Arduino boards, and if you’re curious, you can read about them here. But for us, an Arduino is going to be our way to make machines! The kit we’re using will give us all the tools we need, so if you want to follow along and try this at home, that’s your first step: getting the kit. Elegoo sells the Super Starter Kit on their website, but you can also find it on Amazon, if they’re out of stock.

So, there’s a few too many components to fit into just one blog post. It’s a big kit! Here, I’ll just go over some of the most important, and what we’re gonna use them for. For future projects in this series, if we introduce a new component, we’ll explain what it is there. For this, don’t worry if you don’t know exactly how something works. If you follow the directions, and especially if you experiment yourself, you’ll be surprised at just how much you pick up! Anyway, here are our basics:

Don’t be intimidated by all the components; though this board can do a lot, we’ll be sticking to the simple input and output components. If you’re looking at the name, you should be able to see two rows of pins, one on the top (digital) and one on the bottom (analog). Some of them are special, but we’ll be told when to use what. On the left side, you should see two ports: one is a simple power input, where you can plug a battery into your Arduino, to keep it running when you’re done programming it. The port on top is a USB port, and that’s what we’re going to use to connect our Arduino to a computer, and upload code to it. Essentially, you want to remember where to plug the USB cord in, which row has the digital pins, and which one has analog.

This component is called a breadboard, and it’s used all the time in electronics. The breadboard is great, because it lets you connect components without having to melt them together with a soldering iron, meaning you can prototype ideas as much as you want! Below is a diagram that shows what’s going on under the hood; essentially, each of the holes on the breadboard is connected to the five in its row, except for the two columns on the left and right. Those extend down the whole board, and are great for connecting what’s called the “power,” and the “ground.” Generally, you’ll be connecting multiple components to power and ground, so it’s helpful to connect them to the whole board!

This is a component you might’ve seen before — the Light Emitting Diode, or LED. Essentially, if you connect this to a circuit, it lights up! However, you have to be careful: LEDs only allow electricity to flow in one direction. If you look closely, you’ll see that one leg of the LED is longer than the other; this is true for all basic LEDs! The shorter end of the LED should always be connected to the negative part of the circuit, or the ground, and the longer one to positive. If you connect it correctly to power, it’ll light up! However, if you connect it incorrectly, there’s a chance of damaging the component, so be careful!

LEDs, as well as other components, can be damaged if they have too much current running through them; that is, if electricity is running too freely, and too quickly, they can heat up and melt your components! That’s where the resistor comes in. Your pack should come with a ton of resistors, because you need a lot of them for different circumstances. Basically, when electricity is running through your circuit, a resistor is there to make it harder for the electricity to get through, and protect your components. In your kits, they’re organized by how strong they are (which is measured in Ohms, represented by a Ω symbol). To keep them all organized, it’s helpful if you keep most of them on their tape, because they tell you how many Ohms are on your resistors. However, if you need to identify a resistor, there is a way! The colored bands on the component are actually a code, and will tell you how strong your resistor is! If you ever need to decode this, take a look at this page, click on the “5 band” tab, and input the colors.

Like the name implies, this is a button! You press it, and something happens. But what happens physically? Really, a button is just a wire with a bit cut out. When you press it down, the bit connects to the rest of the wire, and the circuit lets electricity flow! With these buttons, there are four legs; the two on top and the two on bottom are connected, and when you press the button it connects the pairs to each other!

Last one! This is a slightly more complicated component. The potentiometer is, essentially, a resistor, but the key is that you can change how much resistance a pot is adding to a circuit! There are three pins on a pot: the two that are close to each other, and the one all on it’s own — we’ll call this last one the ‘middle pin.’ The two pins that are close to each other, though they seem like they’d connect, actually have to go around the big circle before they connect, so these two always have the maximum resistance between each other. However, if you’re connecting one of the end pins and the middle pin, then the resistance changes based on how you twist the knob! You’ll see how this works in the first project, coming soon!

There’s one last thing you need to do before we can start tinkering! In order to send information to whatever output you’re using, the Arduino needs to have a program, which will be a set of directions it follows again and again. But don’t fret! You need virtually no programming knowledge, and what you do need to know we’ll learn along the way!

Arduino has a special software that it uses to upload programs to the Arduino board. You can download it from this page, and follow the tutorial for setting up your Arduino UNO here. It leads you through a menu or two, where you configure the software to your specific Arduino! Once you’ve finished that up, you’ll be all ready to start on one of our projects! Take a look below at tutorials we’ve done so far, and happy making!

[…] Here comes the second of our new series, All About Arduino, where we explore all the things you can do with just an arduino! If you missed it, be sure to check out our Getting Started Guide! […]

I was reading this and I heard a warm and enthusiastic voice in my head. Your explanations were short and easy to read. I don’t feel the least bit intimidated and I know nothing about Arduinos. Thank you so far.

We appreciate the feedback! Stay on the lookout for more content in the not so distant future.